HISTORY
The International Roosterfish Tournament has always been an invitational tournament, now into its 50th year.

It began with a small group of anglers that knew each other from either business or the LA Billfish Club. In Baja California, Mexico,1966, the VanWormer family was building their new hotel on the Sea of Cortez - “Hotel Punta Colorado.” The area became known as the "Roosterfish Capitol of the world" and the hotel became the site of the first  Roosterfish Tournament in the world.

The first 2 tournaments had 8 anglers but it grew larger each year. From the initial founders there have been a progression of anglers and families that come to fish; husband, wives and eventually the children and friends of those founding anglers.

Through the years there have been several changes in the rules. There have been barbless hooks, days of dead boat fishing, using 2-3 strengths of line for different points structures and the addition of a "stick" to measure larger fish for extra points (without harming the fish). Other species were also included in the point system. These were the formative years from 1966 through the 1980’s.

The tournament finally settled into a set of rules conforming to IGFA standards, settling on 12# tournament test line and  exclusively fishing for Roosterfish, no other species were caught for points.

The Roosterfish Tournament has always been an invitational and exclusive, in that one must know someone in the tournament and be recommended to be invited. There exists a waiting list to participate. The tournament remains moderate in size due to hotel and fishing fleet restrictions. 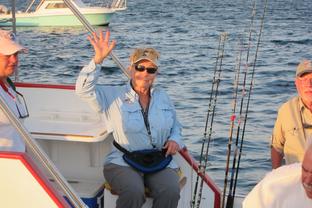 The International Roosterfish Tournament follows IGFA tournament rules. The IRT tournament rules state that all anglers will use only IRT committee furnished "12# tournament test" line. There is a 30 minute catch and release policy that protect the fish. The  point scoring system is also based on time. We fish 3 to a boat. Teams and boat assignments are a random draw.

For more detailed rules and regulations, contact the board of the IRT. 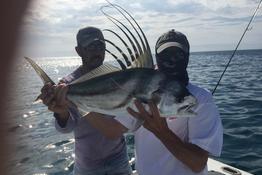 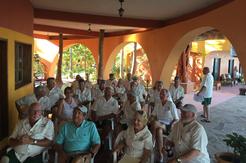 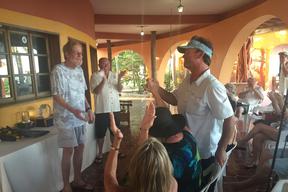 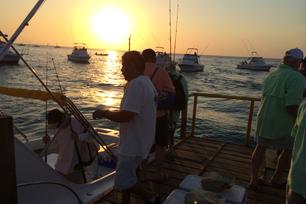